This showreel solely focuses on my animation skills and is aimed towards animation studios or people who are specifically looking for 3D- or Character-Animation.

2. 00:17-00:23 – Die Geschichte einer Legende (“The Story of a Legend”)
Lead Animator for “Rupert” the scarecrow.
I was also responsible for Rigging “Rupert” and the nCloth Simulation of his poncho, pants and belts.

3. 00:23-00:33 – META
Selected scenes from the short. I animated all visible 3d-objects.
I was also responsible for Rigging, Matchmoving and Motion Tracking of the (invisible) CG-standin for shadows and cutoffs. 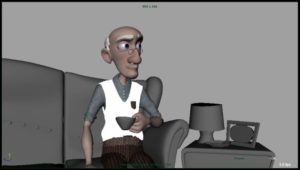 4. 00:33-00:39 – When John Goes Outside
Animation of “John” looking for his caterpillar. As the Project wasn’t finished at the time of writing I used the Soundtrack from RIFT, which was done by Andreas Posch.

5. 00:39-00:48 – Die Geschichte einer Legende
Animation Process for the Scarecrow from Reference to final output.
For more tasks on this project, see 2.

7. 00:52-01:03 – Die Geschichte einer Legende
Animation of the Scarecrow (Foreground character), Background characters were handled by another animator.
For more tasks on this project, see 2.

Sound:
If not stated otherwise, every clip uses its original soundtrack.